From Clay to Chewing Gum

From Clay to Chewing Gum

or how to make and touch the joy

How messy can you get in a small apartment in a big city?  It depends who do you ask  about it.  We have been “pushing the limits” of our small apartment for quite some time and sometimes things get out of control. This is when some of the “Best Day ever” days happen. Well, this project is not the messiest but it is pretty fun. Creating an atelier -like station and energized by some weekend enthusiasm, couple of weeks ago, we  poured  containers of school glue, some water and a cup of borax in a bowl. Yes, Sylvie and me, we were making  Gag or  Slime and impatience was growing as we went along.  Of course choosing a food color, adding maybe some glitter brings smile on the face and color to the hands.  Stirring, mixing and… the best part-  little hands squishing and squashing the wet, soaking material – 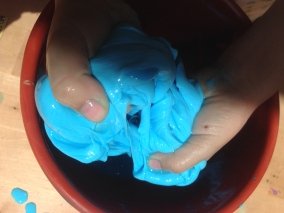 “It feels cold, smooth and stretchy”-

Sylvie  squeezes it between her fingers. It sponges the water but then taken out of the liquid, it does not release any water. A lot of fun to make and to play with. 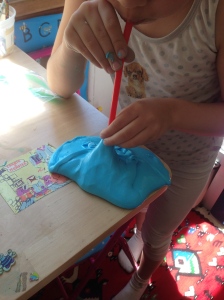 Let the stretching begin!  Pulling it, sticking it from wall to table, watching it moving slowly down like a tick liquid or lava.  For an hour or so, this really feels like a liquid gold to Sylvie – she cuts it with scissors, draws on it and makes small balls  and shapes out of it-

She notices that the gag is like a BUBBLE GUM- forming big and small air bags -bubbles.  Sylvie took a straw and started blowing inside to make bubbles. Pockets of air shake in the blobby matter.  She left the bubbles leak down – 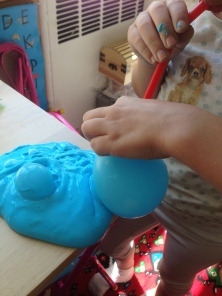 Then she made a pink gag too.

Now that she has two and she found out that it is easy and fun to make, she suggests we open a store at our apartment, selling…Gag. “To whom?” -I am asking, ” To our neighbors and the kids” she responds “and it will be $.50 for a small ziplog bag”.  “Ok , let’s make a list of people who would want to buy gag”. The conversation goes into opening a business and selling real things that she makes, such as gag, snack bags, matching games…

When a princess is daydreaming about her prince in a castle, you just wait to see what is going to happen…       Then racing cars speed up on muddy roads and accidents happen and after the race the wet clay tracks become drawing boards. 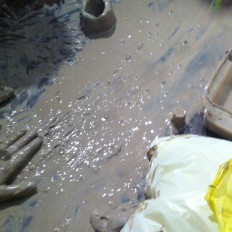 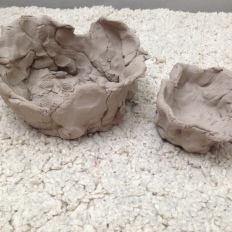 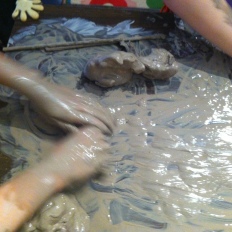 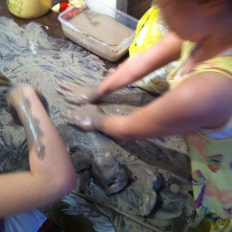 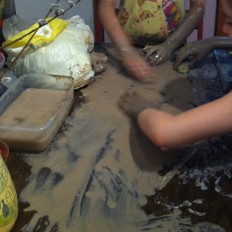 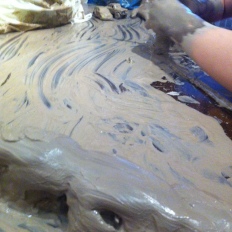 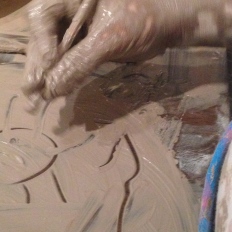 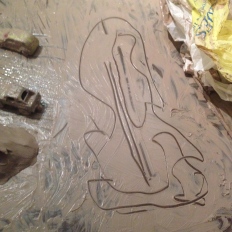 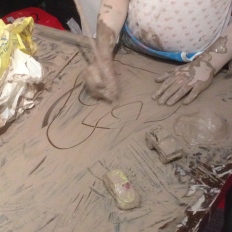 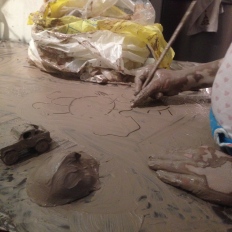 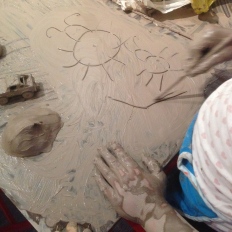 Ahhh…Chewing gum- from the gum ball machine. The more you chew, the more material to make people with. And it’s sweet. Sylvie realized that when under some hot water the chewed gum become softer and it hardens up under cold water.   She started sculpting with chewing gum

I knew it would be a hit!