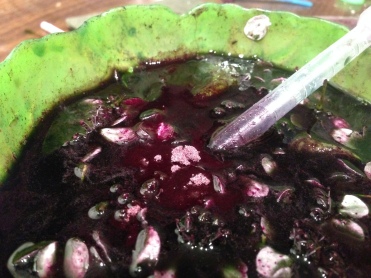 or how this became  “A Hippopotamus resting in the water” 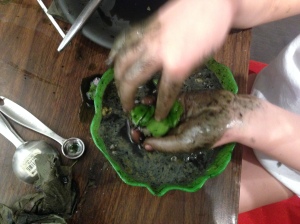 This magical potion started as pure water and purple cabbage dye. Then Sylvie adds some baking soda and citric acid, which made a bubbly volcanic effect, in which the purple color became lighter. Then she pulled out my black food coloring tube from her science box and squeezed a little in the mixture. “So here is where all food colors have been hidden!”, I thought. She knows what I am thinking, smiles while she hurries to put all food colors back in her box and to concentrate again on her mixing. She stirs the “potion” and adds acid and base one after another till the bowl overflows with fast bubbling greenish-black liquid. 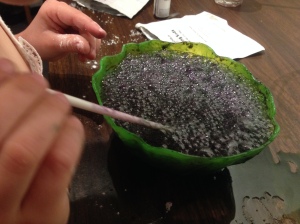 Next, some white cherry blossom petals are thrown into the potion. They soak the dark liquid and become a strange color. “I’ll bring these flowers to spooky land with me and once they grow, they’ll grow bubblegum- a rainbow bubblegum”- says Sylvie 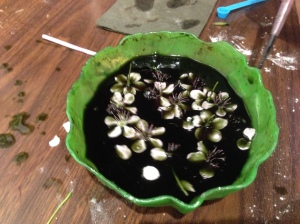 Then a whole egg goes inside and stays there about a minute, while been observed how the shell color changes to greenish dark. Sylvie takes it out and adds some crystals making ingredient from her science box- they sink at the bottom right away and we don’t see them again. Well- it doesn’t seem enough. To my suspicion when I see what she wants to do- she says- “We can put the yolk of the egg and see what it will happen. I think wings will grow on both of us and can will be able fly” and she breaks the egg  into the potion. 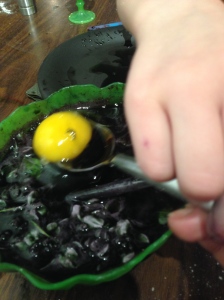 Oh, well, there is only one way to go from there – and it’s messier and messier. Her hands are jumping in the liquid full of small forming jelly crystals, flowers, raw egg and the broken shell… “Oh, it feels slimy and yucky”- she says while her fingers are touching all inside the bowl and squishing the raw egg. More baking soda and citric acid- please! Yes! 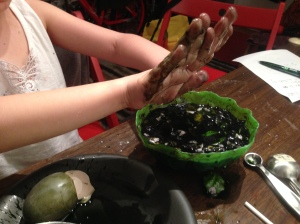 We were rapidly going to the stage of splashing it everywhere and I had to say my serious “No” to black dotted pillows and mostly the carpet.

Next step – taking a shower.
Opps, sorry – enjoying the rain in the bathtub. 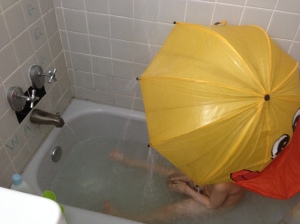